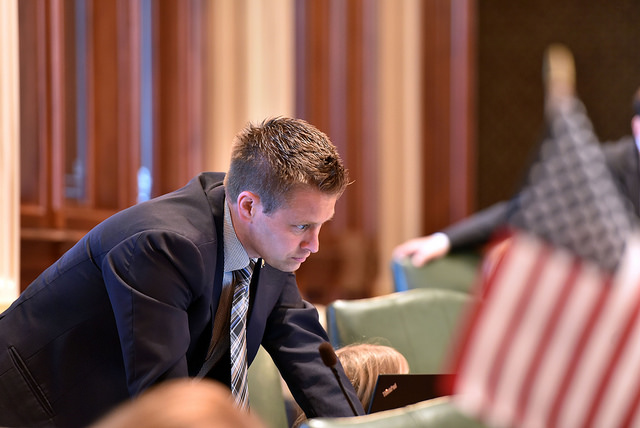 State Representative Joe Sosnowski, R-Rockford, has been appointed Republican Spokesperson on the Revenue & Finance Committee for the 2019-2021 legislative term, a role that positions him to play a leading role in upcoming state budget negotiations. Committee assignments for the 101st General Assembly were announced today as the Illinois House of Representatives prepares to reconvene on Tuesday, February 5.

The Spokesperson is responsible for leading the efforts of the minority caucus within each committee; including questioning witnesses who provide testimony at committee hearings, being the lead advocate for caucus positions on legislation assigned to that committee, and negotiating with the Committee Chairperson to reach bipartisan consensus on as many bills as possible.

“As Spokesperson, I will be a voice for Stateline area families and taxpayers on reforming the Illinois budget and fighting for meaningful, lasting property tax relief,” Sosnowski said. “We have a lot of challenges to face together in the coming months, yet I am cautiously optimistic about the new tone being set in Springfield placing an emphasis on bipartisanship. It’s time to translate rhetoric into results.”

In addition to the aforementioned assignments, Representative Sosnowski has also been appointed to serve on the Cities & Villages Committee, Executive Committee, and the Elementary & Secondary Education: Administration, Licensing & Charter School Committee.

Representative Sosnowski has also been appointed to the 12-member bipartisan, bicameral Commission on Government Forecasting and Accountability (CGFA). CGFA provides the General Assembly with research and objective information regarding state and national economies, revenue projections and operations of Illinois government.